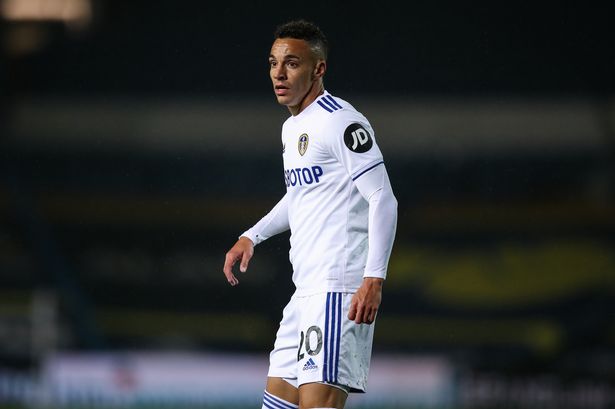 Recently, there has been plenty of talk around a potential exit for Leeds United marquee signing Rodrigo Moreno. The ex-Valencia man arrived with a major profile, seen as a leading goalscorer and shot creator who could take Leeds to the next level up front. Instead, he has intermittently impressed whilst attacking talent from the second tier has more often than not got the job done.

This has left much discussion and rumour – including on here – that Leeds are considering moving on from Rodrigo when the season ends.

However, the player himself has opened up on the rumours, and took to social media platform Instagram to shoot down the rumour of a potential exit, or at least any obvious signs of unhappiness. Chief among the recent rumours has been a breakdown in his relationship with Marcelo Bielsa. However, as Rodrigo made clear on Instagram, this is not the case.

On his social media page, Rodrigo was quoted as saying: “I’m not a person to comment on nonsense stories, however in this case I want to make it clear that stories about me wanting to leave Leeds and a bad relationship with Marcelo are false.

“I am very sorry that some people try to misinform our fans – my feelings are the opposite. I am happy, focused and working hard to help my teammates to end this great season in the best possible way. I love being at @leedsunited, I respect my coach and I identify with this Club!

So, we think that might put an end to the talk that, if nothing else, Rodrigo is unhappy at the club. While a summer exit could still take place, these quotes show that the rumours of a major bust-up are overblown.

What did Marcelo Bielsa say about Rodrigo?

The coach was also asked about his view on the potential for a Rodrigo exit. As is his usual way, Bielsa offered a more philosophical, deep view of the subject of his comparatively poor season, saying: “To explain it exactly, Rodrigo arrived at the start of the competition, he didn’t manage to do the pre-season with us. It took him four weeks to become a starter and after playing his best game, which was against Aston Villa. Then he became sick. He was ill for 20 days.

“Then, after that, to get back to his best state it took him a month. He played 10 to 12 games from a level between medium to high. Then he picked up that injury which he was out for about five weeks with. And perhaps this second where he didn’t play for 40 days to then play again. Perhaps it was too quick because he’s a player who gets his best physical state by gradually increasing the minutes.”

So, as these quotes show, there is little worry from the Leeds top brass that Moreno is the flop that some have assumed or suggested. Though yet to live up to his incredible hype upon signing, few can doubt that Rodrigo offers quality in abundance when fit, firing, and in the right position.

From the sounds of it, Leeds fans should get used to his presence – he isn’t going anywhere.