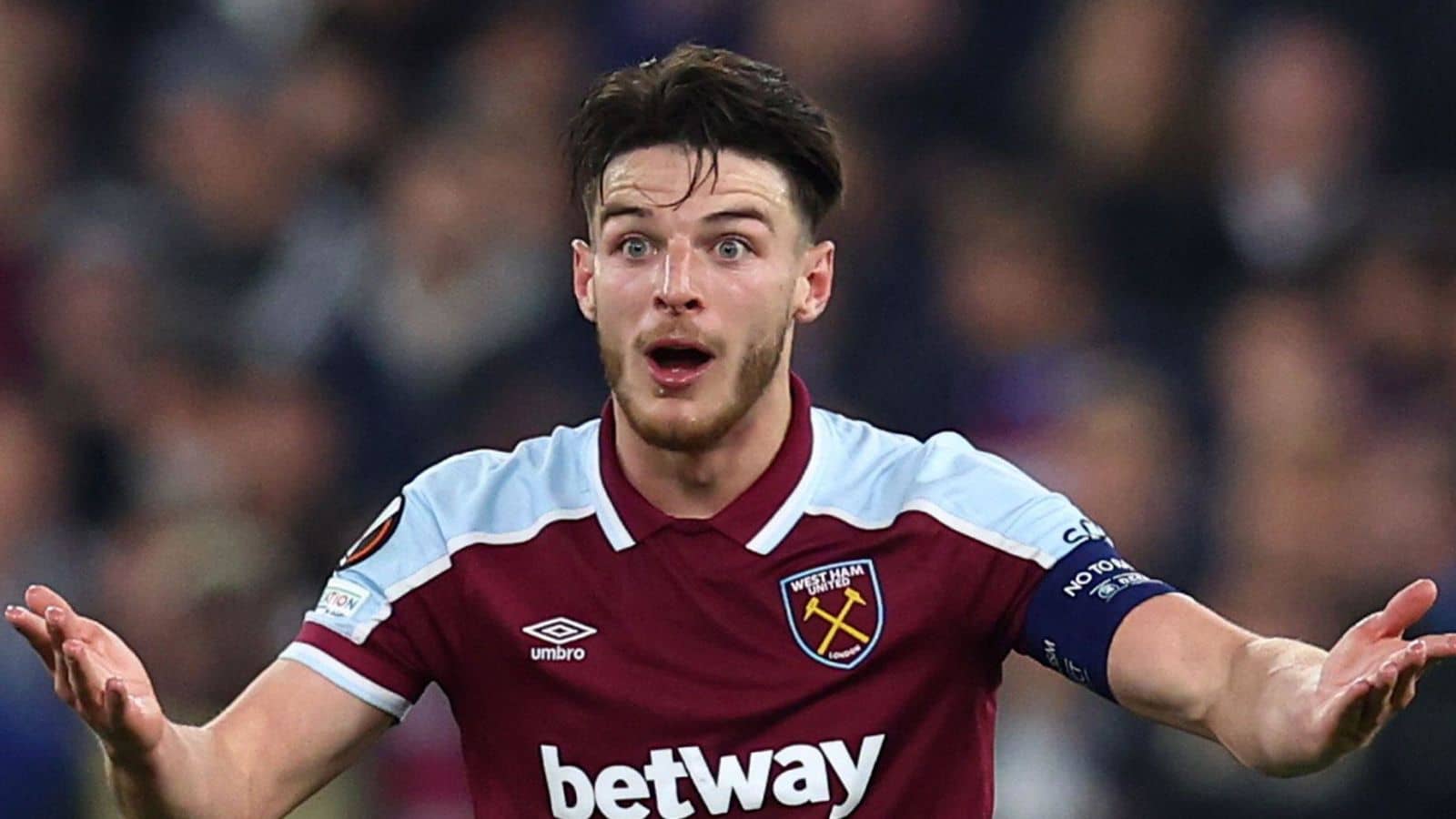 As one of the most passionate players in the Premier League, Declan Rice leaves his heart on his sleeve. The midfielder has gone from being a youthful prospect at West Ham United to being their best player. A midfield dynamo who can run the show more or less on his own, Rice has become a first-pick choice for the biggest clubs in England when assessing summer signings.

However, one thing that is often shown about Rice is that he can keep his composure even when the going gets tough.

On Thursday night, though, even the usually slick Rice began to show signs of losing it. As the Hammers chased a result after the 2-1 defeat at home, they quickly went down to ten men when playing Eintracht Frankfurt. It left the Germans, backed by a world-class crowd, with the space and time to play. They eventually scored, ending the match with a 3-1 aggregate victory.

The Germans, who sit in the lower half of the Bundesliga, now will take on Glasgow Rangers in a showpiece final in Seville. Rice, though, was seen losing it with the referee after the early red card to Aaron Cresswell changed the entire direction of the tie.

What did Declan Rice say to the referee?

As the game went on, Rice was clearly agitated. The whole midfield were. West Ham were swamped, and looked rarely likely to actually scored. The frustration of losing out on a potential European final with the underdog Hammers had some players close to the brink. And a video picked up by FoxSportsMX showed Rice absolutely losing it with the referee.

Speaking to the referee about his decision making, Rice is seen telling him: “Ref, it’s so poor! All night, it’s so bad. How can you be that bad? Honestly, you’ve probably been f***ing paid. F***ing corruption.”

The accusation is unlikely to escape censure from UEFA, especially after the video has gone viral. After the game, an emotional Rice did not worry about holding back when asked about what he thought of the game. Interestingly, though, he noted that he believed the sending off was now justified. Had he cooled down between the above video and his post-game interview?

Speaking afterwards, Rice told the interviewer: “The sending off was probably a sending off looking back at it but some of the other decisions were poor tonight. Nothing seemed to go for us. The ref seemed to make every decision go for them. In the end, when you’ve got someone who is against you, you can’t really do much.”

Rice was not the only one to lose it, either. Manager David Moyes was spotted volleying a ball back at a ball boy as he struggled to keep his emotions in heck. The Scotsman tried to brush it off with a joke about it being ‘perfect for a volley’, but it is likely that his actions will bring some form of charge from UEFA.

For West Ham, the dream dies after a nightmare semi-final with Frankfurt. Rice, and Moyes, will simply need to wait and see if any more comes of their comments and actions during and after the game.